The 7th we were invited to go with Arik and Jenny to the Andice General Store for the World’s Best Hamburger. It’s not all hype, they are really very good burgers.

After which we stopped at the post office on our way home.

Surprise! The truck wouldn’t start. I called our AARP roadside assistance number (that was a mistake – I’ll explain later) and was told that they’d send a tow truck to take us to a GMC dealer in Austin. When the driver arrived, he asked why we wanted to be taken all the way into Austin (about 30 miles). I told him that it was where AARP had routed us. He got on the phone with them and told them he was taking the truck (and us) to Georgetown which was considerably closer.

We arrived at the repair shop just minutes before they were closing for the day. They didn’t have loaner/rental cars and their shuttle service would not take us back to Liberty Hill.

I called Enterprise in Georgetown and was told they had no cars. Really? They transferred my call to another location where I was told that because I had an out of state (Iowa) drivers license, and a VISA bank card (as opposed to a VISA credit card) they wouldn’t rent to me.

This is why it was a mistake to contact AARP instead of Good Sam. If I had contacted Good Sam, they would have made all the arrangements for the rental car for me.

My son Adam lives in Georgetown and so I called him to ask for a ride. He had kids to take to after school activities but he could make a quick run to get us home. Thank the Lord! What a day.

However, it was closely followed by another thump and I realized that I was now leaning to the left. Looking down, I could see that the floor of our slideout had literally fallen away from the wall about 3-4 inches. Once, we processed the fact that the floor had fallen out from under us, we started moving as much weight off of the slideout floor as we could.

I sent out a general distress message to our family. We were planning on heading back to Iowa on the 26th. The RV was to go into storage while we were gone. However, it could not be stored in its present condition. Following on the heels of the truck repair, we were not in a financial condition to have it repaired. I called our Progressive Agent. (by the way, I guess I never followed up on the shattered window. It was covered under our policy. However, the repair cost was $250 and we have a $500 deductible.)

We received a message from Arik and Jenny that we could come and stay with them until we decided what to do with the RV. So we packed some bags with clothes, medications, and anything else that we thought we might need. When we arrived at the kid’s they showed us the guest bedroom and we began unloading our stuff.

We began making a list of our options. We started with the realization that because the floor had disconnected from the wall, the slide out would not slide in and would therefore would be impossible to tow down the highways.

If we removed our belongings that would mean finding a place to store it (rent a storage unit or get an apartment). Getting an apartment also appeared to be on our list of “not possible”. There was the option of loading everything into a U-Haul and taking it back to Iowa.

We went through Temple Texas a” t 9 o’clock and through Waco Texas at 10. At 10:30 we stopped in Ross Texas at Sonic to grab a sandwich and to get up and stretch our legs. We made few stops along the way, just for gas and bathroom breaks.

While Ella picked up the dryer sheets (before we leave our trailers for the season, we fill them with dryer sheets. Ella believes it deters mice. I put out mouse bait to kill mice.), I got the shoreline of our Excel fifth-wheel plugged in and reattached and opened the LP tanks. That allowed me to get the furnace going.

We crawled into bed and slept until around 8 a.m. Then we went to Village Inn for breakfast. John brought the Hitchhiker to Cutty’s and set it on a temporary storage site. Rain and Cold continued.

In the evening, John, Dawn, and Brandon invited us to Felix and Oscars for supper. Afterward we stopped at Wal-Mart for water hose and filter.

Usually we hurry back because I start to work at the campground fee booth early in May. This year, however, we had an additional reason … a new great grandson.

Then to Wal-Mart to stock up on groceries. There are canned goods in the Hitchhiker. However, we can’t get to the pantry in the Hitchhiker when the slideout is in. And we don’t want to risk further damage to the floor by opening it. Later went to see brand New great grandson, Henry Arthur Roff. On the way home, we stopped at Chicago Speakeasy for prime rib.

We had lunch at Grimes Senior center and played lots of games. Joyce was very excited to see us return. She loves to play a board game called Fast Track. However, she has trouble finding anyone to play with when we’re away.

L-O-N-G conversation. Pie Rush Wednesday is another of our summertime routines.

Then to Grimes and the senior center for lunch and games. We went to the Hitchhiker (in storage) and moved a few things around. We brought both recliners from Hitchhiker to the Excel. We did that for two reasons. One to get more stuff out of the way in the Hitchhiker so that when we can get to work on it there’ll be less stuff in the way. And two, the recliners are more comfortable that what are in the Excel.

After the nurse practitioner examined the toe, she prescribed some antibiotics and said to soak it several times a day in hot water and Epsom salts. Then it was back to center for Lunch and games. In the afternoon we picked up prescription. Once we returned to Cutty’s, we went to the Clubhouse to do our laundry. For supper we got a pizza at Casey’s General Store

Appointment set for 20th of June. We made it to the Grimes senior center in time for lunch and then played a few games after lunch.

We stopped at Cutty’s office on the way back in and picked up my first paycheck for the season. It was for just a 13 1/2 hours and I got $112 which I deposited electronically. One of the joys of retirement, working seasonal, part-time work for minimum wage.

It was around 11 when we got home. Ella went to sleep until sometime after 2.

I worked on more sermons while she slept and then set my alarm for 2 and took a nap also.

Ella woke from her nap and demanded oatmeal right now! After she had eating her oatmeal, we went back to the dentist to get her new dentures. On the way home we stopped at Village Inn for Pie Rush Wednesday. We had just gotten inside the building when it started raining really hard and then about three minutes later it increased in intensity. There were trees down and limbs scattered around the campground. One large limb way across the camper just across the street from us. She was not home at the time Dominoes on Wednesdays and Card Jackpot on Fridays are another part of our summer routine.

From Memorial Day through Labor Day, I preach at the campground nearly every Sunday. I prepare the bulletins in advance and email them to the secretary at UPUMC who prints, collates, and staples them for us.

There is a Public Health Nurse that comes once a month to care for our feet. It is on a rotating schedule so you can only get in once every three months. Having gotten our feet taken care of, we ate and played games until our 2:30 appointment at Unity Point Clinic. Ella still having trouble with her ears, was given a prescription for Allegra D and Flonase. Tom had 25cc of fluid drained from the bursitis on his left knee.

We did our normal trip to the senior center in the morning and then in the late afternoon/early evening, we met up with Frances and Sandy and Stoney and Sue for pie. Then in the evening we played Train Dominoes. We play Mexican Train throughout the year in different locations. And every location has their own house rules. I do fairly well until someone yells, “Hey! You can’t do that.”

Ella and I were the only ones there. This was partially due to the fact that our yard signs (we had 5 originally) were missing. Tom then worked from 3 to 10 at the Fee Booth.

It was held at the entrance to the campground where there is an eagle statue and where we fly the US flag, The POW/MIA flag and flags of all the armed forces. There were fifteen to 20 people present.

Since we just past the eleven year mark from her breast cancer surgery, any change gives us concern. After the exam, they set an appointment to do a needle biopsy on June 7th. 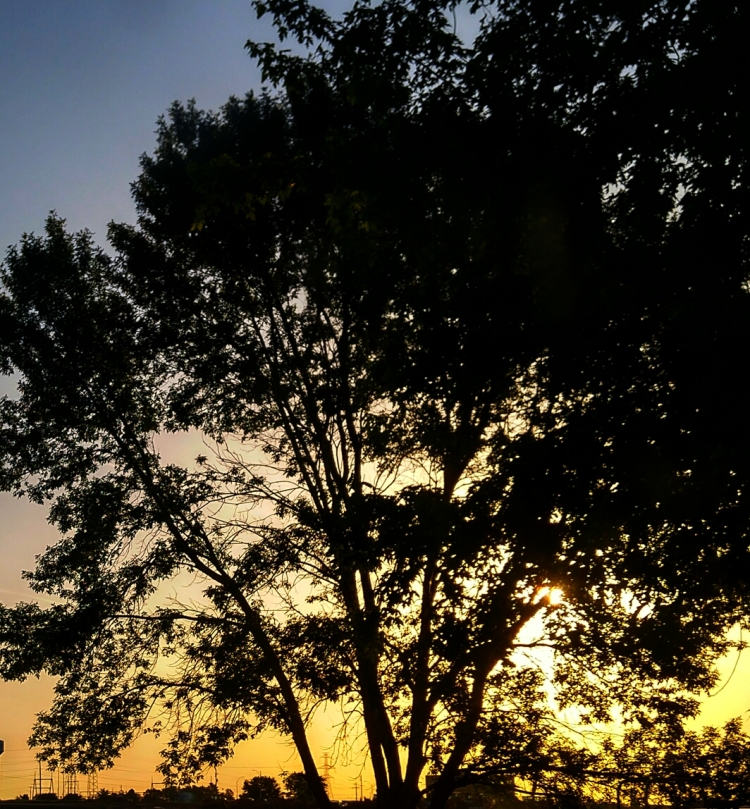