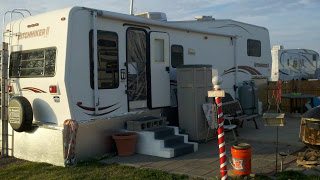 We purchased the second RV, a 2001 Hitch Hiker.  We intentionally purchased a smaller fifth-wheel (30’) because it would be easier and less expensive to tow to Texas.  Since we would be living in the Hitchhiker (from now on referred to as HH) for only about four months of the year, it would not have to have all of the storage space that the RR had.  We did chuckle to ourselves that the trailer we bought to take to Texas is a full four season and the one we were leaving in Iowa was only a three season.  Little did we suspect the changes that were in store for us!

We purchased the HH and made arrangement to have the RR moved from our seasonal site at Cutty’s.  The RR was going into storage so that we could give the HH a good ‘break in’ period.  The plan was to live in the HH through another Iowa winter, spring, summer and fall before heading to Texas.  That would let us become accustomed to the trailer.  The reality of what happened was; the slideout on the RR refused to slide in.  Upon examination, it was discovered that a corner portion of the slideout had suffered water damage and ‘dropped’ several inches.  It may be repairable.  However, since the RV is twenty years old, the cost is likely more than the trailer is worth.  The Cutty’s maintenance staff was able to tow it (with the slideout still in the out position) to the on site storage area.

Now we are left with the possibility of moving all of our belongings from the RR to the HH when we had planned to only move a portion of them.  We now need to make plans to either tow the HH to Texas AND BACK or to purchase yet another new RV.   There are other options also such as renting a place to stay, abandoning the idea of moving with the seasons or …. ?

We’d just have to see what God had in store for us.  For now we are settled in for another Iowa winter in our new home, the HH.  We have already had our first snow of the season.  One to five inches of very heavy, wet snow that took down trees and power lines as well as snarled traffic with accidents.