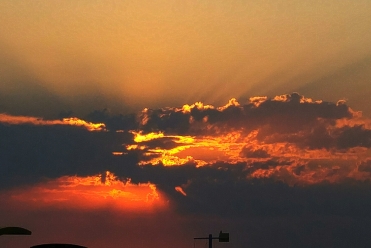 The sun was just coming up when we stopped in Nebraska for breakfast.

Mrs. Claus and I left around 4 a.m. on Thursday September 14th and spent about 14 hours driving to Santa University in Westminster Colorado. 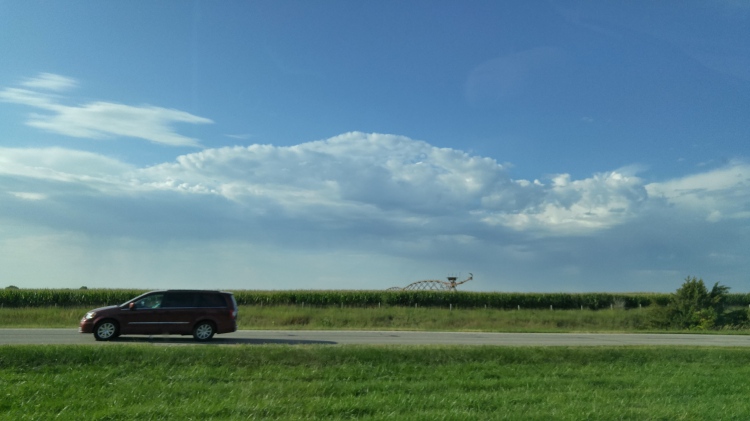 Western Nebraska had a lot of sky to look at … and nothing else.

Upon arriving, we registered at the hotel and took our luggage to our room.

We finally got to see mountains as we arrived at our hotel.

Then we went back to the lobby to sign in with Santa U. We received t-shirts for both Ella and I. It was an informal meet and greet and then a buffet supper.

The training was mostly held at Drury Suites and Inn  in Westminster Colorado where were treated like royalty. I got a real kick out of the female voice of the elevator. It always sounded a little depressed when it would say, “Going up or going down.”

Friday the 15th, after breakfast,

we gathered in the large conference room for a Welcome and sessions on Company Experience. Then we heard from some of our partner organizations: Autism Speaks, NORAD (yes the North America Aerospace Defense command),and Emotional Support Animals.

After lunch we had a time for some of us to introduce ourselves and tell our favorite memories. (This continued throughout the week until everyone had had a chance to speak) Then we continued learning about our partnership with: Save the Children and our service project with them.

Since this is a new company born by blending Noerr Programs with Cherry Hill Photography. These were the two largest suppliers of Santas to malls, events, resorts, business, and et cetera. Now that they have combined into Cherry Hill Programs, they truly dominate the market.

We took a short time to fill 300 “stockings” with toys for children affected by hurricane Harvey. Once we were done with the Christmas packages, we had a presentation by our partner, Shutterfly. From there we went outside for a group photo and then dinner at the hotel.

Saturday 16th, after a great breakfast buffet, we continued with member introductions and their favorite experiences. Then we moved into the more serious items such as how to represent ourselves in a positive manner. We discussed costuming and grooming as well as how to be aware of our Santa presence on Social Media such as Facebook, Twitter, and the like. How not to get caught with our pants down … figuratively and/or literally.

We then took a trip outside for another group photo. It’s like playing Find Elmo. Can you see me?

When we got settled back inside, we had a demonstration on beard whitening and shaping. One of the younger Santas had some gray in his beard but it was mostly a light brown. After one bleaching it was almost completely white with just a little yellow along the sides. His hair was going to need at least one more bleaching. The following morning, he startled himself when he looked in the mirror … it was that dramatic of a change.

We moved on to “Tough Kid Questions” such as “Can you make Mommy and Daddy quit fighting?”, “My grandma died. Can you bring her back so I can see her one more time?”

Then it was things like, How to Prepare for 12 hour days, What to do when the set is slow, How Santa can help create a team atmosphere on the set, Special Promotions (like Special Needs and Pet Night), and Safety Procedures. That wrapped it up for Saturday.

Sunday 17th After breakfast, we had a short praise service in the lobby of the hotel.

When we were back in the conference room, we began to deal with the questions ask BY Santa. Just before lunch, we heard for Doctor John about How to Stay Healthy and in Shape. We broke for lunch and then came back to more from Dr. John. Around 2.:00 is when we began with Media Protocol and Media Training followed by Ethics of Santa. Our last session was a seminar on What Makes a Quality Photo.

We met at a local park for a BBQ from 6 to sometime after dark.

Monday 18th we loaded into shuttles and were taken to the Pole .(Company HQ) for a variety of things from Studio Training, Tech Support, Payroll, Field Expectations, meeting with Judy and Philip (heads of the company) and the big thing for most of us … being fitted for our suits!. After that we all met outside for a final goodbye. Some left from there to the airport. Some started driving toward home. And some of us took a shuttle back to the hotel. Ella and I had booked an extra night so that we could be rested before we began the long drive home.

Tuesday 19th even though we tried to sleep in, we were too pumped up to sleep much past five. There were a few other Santas still in the hotel as we went down for breakfast. It seemed to take less time to load the pickup than it did to unload it when we arrived. We were on the road around 7:30.

We stopped shortly before crossing the Colorado / Nebraska boarder to have a lite lunch at Lucy’s Place. It is owned by the family of friends from Cutty’s. We shared a buffalo burger (they raise their own buffalo) and a couple of pies.

More long hours of driving … stopping for gas and potty breaks … followed by more driving, finally brought us to the McDonald’s where we stopped for breakfast on the 14th. We met up with Hazel there and sat talking for about an hour.

Shortly after crossing into Iowa, we stopped for gas and to run the truck through a car wash. the windshield and front of the truck were plastered with bug guts.

It was about 9:30 when we arrived home. We elected to leave everything except the CPap machines to be unloaded in the morning.

Ella may submit her story of what the Mrs. Clauses did during their time at Santa U.