Tom had his semi annual checkup with his wonderful VA doctor as well as a follow-up with the doctor who performed the more invasive part off his heart surgery.

We dog sat with Zeus while his family was on spring break.

Attended several of Beket’s football games as well as Tate’s football games. Ella had her physical before heading up to Iowa. I had my last visit with my cardiologist until we return to Texas in the Fall.

We said our goodbyes to family and friends and left for Iowa on May 1st.

From May through September we had several routines in our schedule; Wednesday’s we gathered at Village Inn for pie, most mornings we met at the campground cafe for coffee, Thursday evenings we were there for family style meals. There were countless cookouts and community breakfasts.  Not everything involved food … but most of them did. I preached most Sundays from MAY day through Labor day.

Ella had an appointment with her doctor as soon as we we’re in Iowa. I started to work in the fee booth at Cutty’s campground on. the 6th. We celebrated Mother’s day at John’s with nearly all off the kids.  Ella started working at the clubhouse on the 9th. but only worked a few days after that. There was a change in what was expected off her. She would have spent some days working alone in the rental units. She couldn’t have be able to work through the summer in non air conditioned buildings. I didn’t like the idea that, if something were too happen to her, she would have been working alone.

Around the middle of May Ella began going to a chiropractor several days a week. On the 21st we went to a Williams family reunion with some of my nieces and nephews. On the 23rd I was called for jury duty, but wasn’t chosen. We started attending the Grimes senior Center on my days off. I started preaching again at our Sunday Worship services that go from Memorial day through Labor day.

I had a colonoscopy on the 7th.

Our section off the Resort had a block party the day before Father’s day.

At the end of June, we had a head to toe treatment…literally. We saw the dentist in the morning at the foot clinic in the afternoon.

Ella had a colonoscopy on the 29th.

Spent part of the 4th with family, however, I had to work.

July 23rd was Christmas in July. I dressed as Santa so kids could get their photos taken with me.

6th was the Nye family reunion.

24th was a gathering of the Johnston High School class of 65.

Preached the last sermon for the season on Labor day weekend.

10th we had a block party in the C section of the resort. (the “C” designates seasonal sites. But it is so much fun to call it a C section Party.)

On the 19th we started on drive back to Texas.

On the 21st we were back at choir practice on Liberty Hill, Texas.

We got back in our Texas groove. 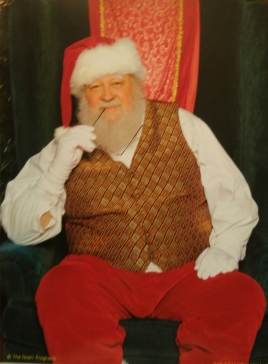 and listen to children tell me what they wanted for Christmas. Being a mall Santa was very rewarding in many ways, including financially.

Christmas morning I got to preach at Cross Tracks Church,  our home church in Texas, so that Pastor Steve could have the day off.

We celebrated our Anniversary on the 26th.

27th I had an eye exam and was fitted for 2 new pair of glasses.

28th I received my final pay for being Santa.