Tom was up at 5:30 and spent some time working on sermons and bulletins. After Ella got up and was showered, we went to the cafe for breakfast pizza (scrambled eggs, bacon, sausage, and several types of cheeses).

We then went to the Grimes senior center for games and lunches.

I think it was nearly 2:00 when we finished our last game of Fast Track.

Tom’s prescription was ready for pickup at Walmart so we also purchase a few non perishable groceries.

From there Ella wanted to go to Home Makers (furniture store) to look for recliner love seats. I was surprised that they are all electrically adjustable and if you prefer they be manually adjustable, they have to be special ordered. This seems like a sad statement on modern life. When it becomes too much work to pull the lever on the side of your Lazy Boy recliner, you really are a lazy boy.

It was hot (93 degrees) in the afternoon and the air conditioning was running constantly.

Around six o’clock I started to grill some steaks when the power went out. Since we live in an RV, the ceiling lights are on a separate power supply (house batterys) and they stayed on. I first checked the RV’s breaker box and toggled all the switches off and on.  But, nope, nothing happened. So then went outside and checked the power pedestal. I toggled those switches off and on. Still nothing. That’s when I put in a call for the campground maintenance to come and help. It was maybe fifteen to twenty minutes when he arrived. He went to the pedestal and toggled the switches and the power came back on. Evidently, the breakers had to cool a while before they would reengage.

At this point we turned the air conditioning off and just ran it on the fan setting. We finished our supper of steak, baked potato, and beans. By then it was becoming overly warm so I turned the a/c on again. Instead of waiting for the Excel to cool off again, we went to Home Depot to pick up two sixteen-cent spikes. I want them to hold our awning support more securely to the ground.

After this major purchase, we returned to Cutty’s and went to the cafe for ice cream. We stayed at the cafe for about a half hour. By the time we returned home, it had cooled off considerably.

The rest of the evening was spent watching television and working on the blogs. 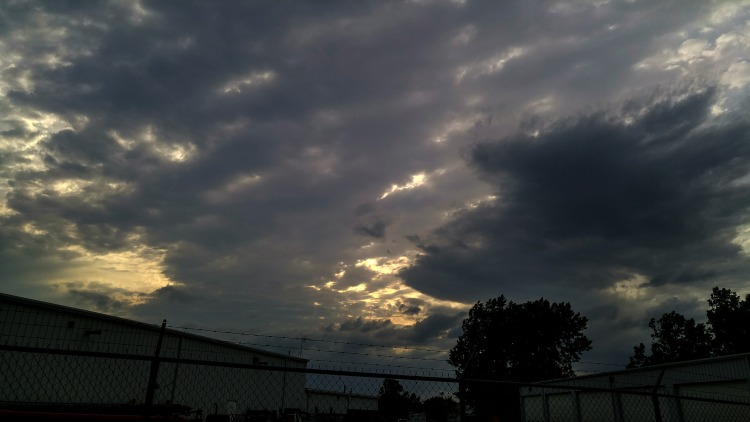 Sky at sunset was full of clouds. We sure could have used a few of those during the heat of the day.