Tuesday 17 The morning started at 48 degrees. It was my youngest daughter’s birthday. I had called Heather the night before because I wasn’t sure what hours she worked today. She works as a butcher in a restaurant / meat market. Sorry, I don’t remember the name … it is strange. I do remember that it means something like, “Of the 2 kingdoms (plant and animal) eat well.”  She is a chef but has found that her real passion is butchering.

The first thing on our agenda was going to the Leander Senior Center for games and lunch. The attendance has been extremely small every since our return. Two factors at play here. One, our normal chef is off on medical leave and her replacement, while competent is not creative with the Federally mandated menu. Two, last year the road in front of the complex was widened which took some of parking. There just isn’t enough space for the Senior Center and the Headstart daycare that share the parking lot.

Those of you who live on fixed income will understand that occasionally the month lasts longer than the money. That is the situation in which we’ve found ourselves. Our travel expenses (from Iowa to Texas) took a larger toll on the account than expected. Looking at our budget it was clear that our last automatic payment would come out of the account before the infusion of money. Our credit union will automatically cover any overdrafts (that’s a good thing) and charge us $25 for each overdraft (not such a good thing).

We had a small amount of cash on hand however; Ella needed a couple of prescriptions filled. The last time those two prescriptions were filled they totaled between $60-70. We did not have THAT much on hand. I suggested that our church (Cross Tracks Church in Liberty Hill, Texas) would most likely loan us money to cover the two refills if we asked. However, before we could ask for a loan from the church, we needed to call the pharmacy to see exactly what the charges would be. Ella called and then turned to me with an odd expression on her face. “$6.00 each,” she said. We immediately drove to the pharmacy and got the drugs. I said a quick prayer, “I don’t know what just happened here. But thank you, God.”

Also, we normally carry a couple of Bibles in the center console of the truck. They seldom get used because we have other bibles plus the ones on our electronic devices. However, when we were going into the Pastor’s Bible Study, I grabbed the bibles from the truck. There were papers (bulletins etc.) in my bible. As I pulled them out, I discovered $50 dollars (2 20s and a 10). I have no memory of placing them nor when. As I said the bibles seldom leave the truck. So, “Thank you, God.”

Now that we had some cash, we went to a local credit union and made a deposit to our home credit union. That more than covered the expected shortfall in our account. God is good all the time. All the time God is good.

Wednesday 18  It was 47 degrees at 6:15 in the morning. We had slept with the bedroom window open. It was a little brisk so I turned the furnace on for a few minutes to remove the chill. Forecast was for a high of 81 and I believe we reached or surpassed that expectation.

Being Wednesday, are first stop after breakfast was Cross Tracks Church where the Grandies gather for service work / card ministry, fellowship, and games. This Wednesday was also the once-a-month meal together. For lunch we had enchiladas (both chicken and beef), with cornbread, pinto beans, and lemon bunt cake.

Choir practice was cut short because we didn’t practice the cantata. Rick, our very talented keyboardist was in Alaska. He has constructed a full orchestra sound for the Christmas cantata.

We’ve had such clear skys lately that I’ve not taken any sunrise or sunset photos. (no clouds equals no color in the sky) Finally I got some in the evening.

Thursday 19 It was a little warmer this morning; right around 60. I checked my INR and blood sugar and found them to be in range … though the glucose was a tad higher than expected.

There was some ground fog along with the sunrise. 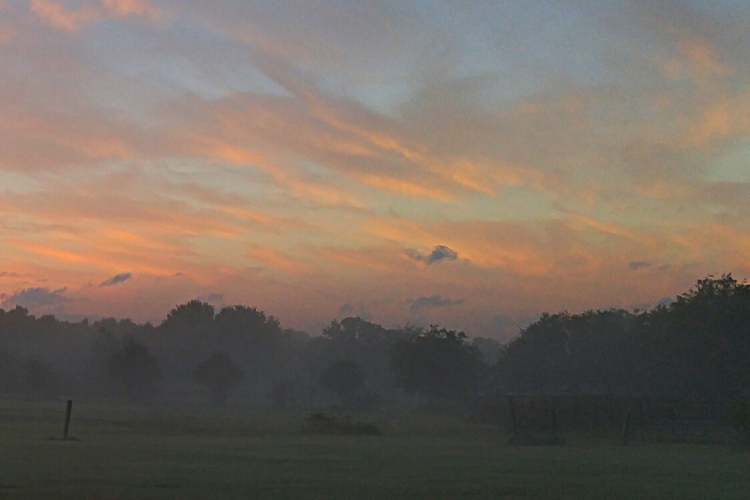 After breakfast we drove to the post office, From there it was to the Over the Hill Gang. Ella brough our Fast track game and she and I sat and played. Shortly Jeri (her first time there), and Ed and Pat (their second time there) arrived. We introduced ourselves and ask them to join us for a game of Fast Track. We played until lunch time (Ham, potatoes, beans, green beans, corn bread and a variety of salads). After lunch we played Canasta with Ellen & Ira, Dorothy, Jeri, and Ella & myself.

We played until around two thirty when we needed to leave to get to Ella’s Ear, Nose, and Throat doctor. They rechecked her hearing. It was amazing to me as I saw the graph of the hearing in her right ear change. I had watched the screen during her first visit and saw how much more she was hearing with her left ear than her right. This time the hearing in her right ear was equal to or better than her left. The doctor then did a visual exam and declared that the hole in her eardrum was nearly healed.

Friday 20 The day began with temperatures in the low 60s and a light mist in the air.

We had only one thing on the schedule for the day; lunch with Tate and Emery at their school. We arrived at the school shortly before noon and got signed in and purchased our lunch ticket. From there we went to the cafeteria to wait for the kids. We had been there only a moment when Leigha arrived. She was working from home, which is only a short distance from the school, so she was able to come also. A few minutes later Tate’s class arrived and we joined him in the lunch line. My son Adam works as a teacher’s aid with special needs children at the same school. That meant he was also able to join us. I had a chance to talk with Tate a little before Emery’s class came in for lunch.

She brought a friend to sit with us. This is the first time that I knew Emery wore glasses. Evidently she has worn them for several months now. She can see up close just fine but was having trouble seeing the board at the front of the classroom. All too soon their lunch periods were over. Tate’s first and then Emery’s. Adam and Leigha had to return to their work.

So Ella and I came home with nothing else on the schedule. I drained our holding tanks and then worked on this blog until I began to doze off while typing.  That was when I lay back in the recliner and napped. Being 70+ and retired has its perks.