I was awake (fully) at around three. That is several hours too early even for me. But early or not, I was awake. I considered getting up, dressed, and about my day. However, I considered that the noise and activity of that would trouble Ella’s sleep. So I lay abed, opened the smart phone (screen on night mode and as dim as I could make it), did my Bible readings, made some sermon idea notes, checked the email for prayer chain posts, sent some prayers, read some social media, checked on news feeds, and began working on this blog post.

Yesterday’s high was 54° and last night’s low was 44°. My WeatherBug says that we are having light rain. However, as I look out the window into the dark, I see no sign of rain. The sunrise is still a few hours away. If the sky allows, I’ll get a sunrise photo.

I got a loaf of frozen bread dough from the freezer and put it in a bread-pan to thaw and rise. Since it appears that it will be cooler again today, some fresh baked bread sounds like a good idea for both the bread and the little extra heat.

It is now a half hour after “sunrise” but no sun. And the light rain that WeatherBug mentioned has actually arrived. I’m not a fan of thunderstorms and high winds but soft rains sound somehow comforting to me.

We went in to Leander Texas to do some laundry at the laundromat.

And then out to lunch at Taco Bell. 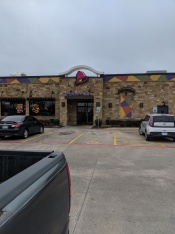 The next stop was Walmart for some groceries and prescriptions. Unfortunately, not all of the prescriptions were ready. That means going back on Monday after games and lunch at the Leander Senior Center.

When we returned home, I checked on the bread dough. It had about tripled in size rather than double. I punched it down and set it aside for a while and then baked it anyway. All I can say about it is, “I’m glad we purchased a loaf of bread while at Walmart.”

Although there wasn’t a visible sunrise this morning, the sunset was worth seeing. 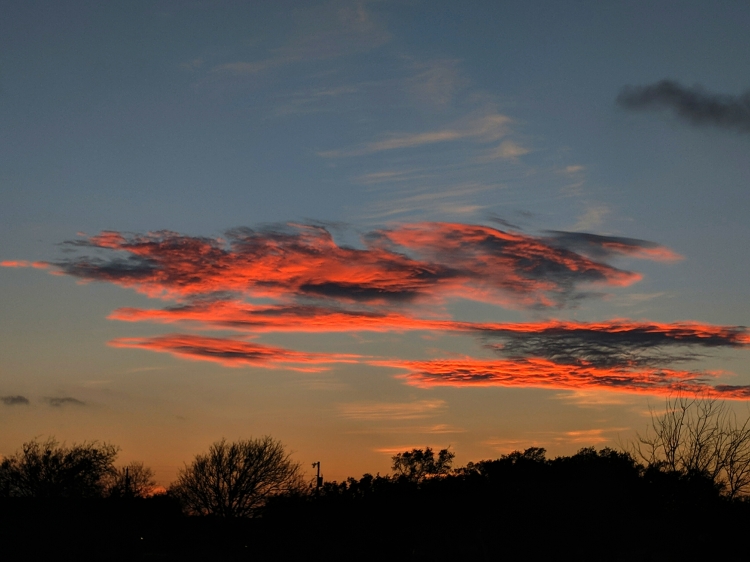 Cross Tracks Church hosted a Game Night. People brought board games to play and some snack foods. We had six people playing Fast Track at our table. There was a rather spirited group playing Chicken Foot Dominoes at another table. There were also children playing more “enthusiastic” games with foam dart-guns and Nerf footballs. The Bridge players went into one of the classrooms to play as it was too noisy. We arrived home around 9:45 which is close enough to bedtime. So to bed we went.

What are some of your favorite games to play with friends and family?

It was 48° this morning and damp. Most of the fog had dissipated before I got outside for a photo.

But if you look closely you can still see it lingering in the background.

We attend Cross Tracks Church while in Texas. They claim to be there friendliest church in Texas. And quite frankly, they live up to that. You are greeted in the parking lot and assisted as needed. When you enter the building you are greeted again and given a bulletin. Your next stop is at the breakfast bar which is stocked with breakfast sandwiches, burritos, fruits, cookies, donuts and rolls, as well as coffee in assorted flavors. There are also juices, sodas, and bottled water.

You’re likely to be greeted several more times with handshake and hugs before and after entering the sanctuary.
There are two worship services (except when a month has a fifth Sunday, when there is a combined service*).

The first service at nine is traditional and the eleven o’clock service is contemporary. Sunday School classes for all ages is between s worship from ten to eleven. There is a staffed nursery and children’s church.
And that’s just Sunday. There are groups, meetings, and activities here all the time. This church is alive and likely.

*The fifth Sunday’s combined service is followed by a huge potluck.

After worship and Sunday school, we returned home. Normally we attend whatever game or activity that the grandkids are participating in on Sunday afternoons. Lately that had been Tate’s football games. However, since this is Super Bowl Sunday, Tate had no game. That means, for us, nothing particular to do. And nothing in particular did we do.

Here is a follow up on the rooster comb injection that I had last Friday. My knee hurts as normal and yesterday there was some discomfort at the injection site. Not enough to be called “pain” but also not normal.

Ella posted: Days like today, remind me why we come to Texas in the winter. It’s a beautiful day, the sun is shining, not hot but not cold. We can sit back with the doors and windows open and enjoy the fresh air. Very restful.