Awoke to a still overcast sky and 47°. It is Saturday with nothing on our schedule so Ella chose to sleep in. I know that she was awake and coughing a lot during the night.

In the meantime I got up and fixed pancakes, bacon, and eggs for breakfast.

For a change, I used our George Foreman® Grilling Machine to prepare our food. 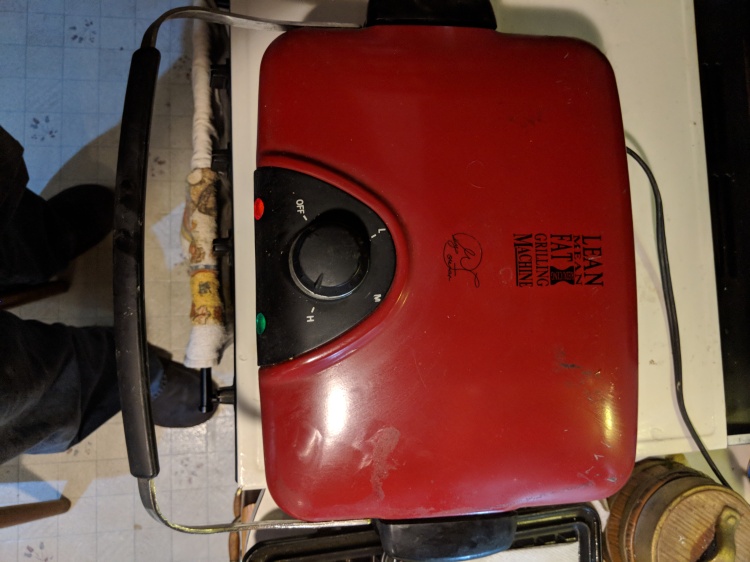 At one time we used this a lot. However, it has been unused for over a year now. Mostly because it was stored way in the back of a bottom cupboard where it was easily forgotten.

It is very versatile with five interchangeable plates.

This is actually our second one of these machines. The first one we purchased last century (yes, way back in the 1990s) while we still lived in a sticks and stones house. At some point the first one quit heating and we went to buy a replacement.

What we found was there were a lot of George Foreman grills, but we couldn’t find the exact machine. We ended purchasing a used one on eBay® that didn’t have the griddle pan or the waffle plates. However, our existing plates fit the machine just fine.

It is now 9:30 a.m. and the sun has come out from hiding. Ella is still asleep. And I have been working on this post while preparing and eating breakfast. So now I’m going to do some reading, studying, and more serious writing. More later.

After Ella was up and fed, we took three loads of laundry to the laundromat.

The sky to the northeast of us looked very dark and threatening for most of the day but didn’t amount to anything here. The sun was in and out of clouds until mid afternoon when it came out to stay.

Yesterday I’d posted about Walmart not having Ella’s prescriptions ready every though they had sent her text messages saying that they were ready. The pharmacy tech had said that they would be ready today.
I had no intentions of driving back to Cedar Park (approximately 20 miles one way) just to pick up the meds, since Ella had enough to go through the weekend.
We normally go to the Leander Senior center on Mondays. Walmart is only an additional couple of miles from the center. So it made sense to wait.

Well, we went to do laundry in Leander and the laundromat is even closer to Walmart than the senior center. So, yes, we got her medications and some groceries also. At ten miles to the gallon and gas $2.15 a gallon I think you’ll understand my reasoning.

After a day of mostly overcast sky … this sunset. Glorious