58° and lightening greeted our arrival at our summer home. (See the end of yesterday’s post for our misadventures there)

We went to bed this morning just before six so there were no sunrise photos. Actually, since a short lived rain storm came through after we were in bed, I doubt there was a sunrise.

Fortunately it had stopped raining by the time we woke up around ten thirty. Our patio and deck were covered with buds knocked off of the maple trees in our yard. 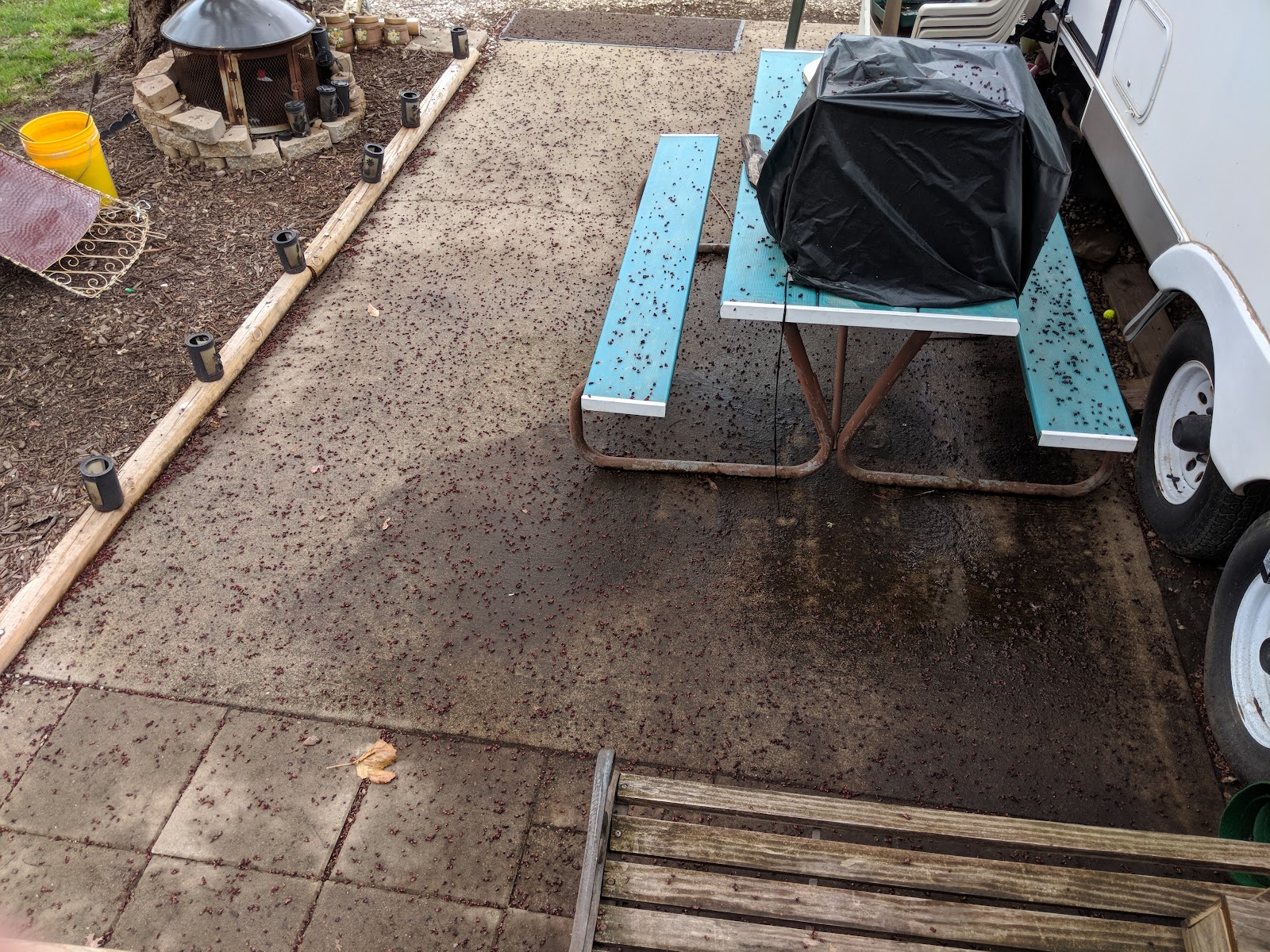 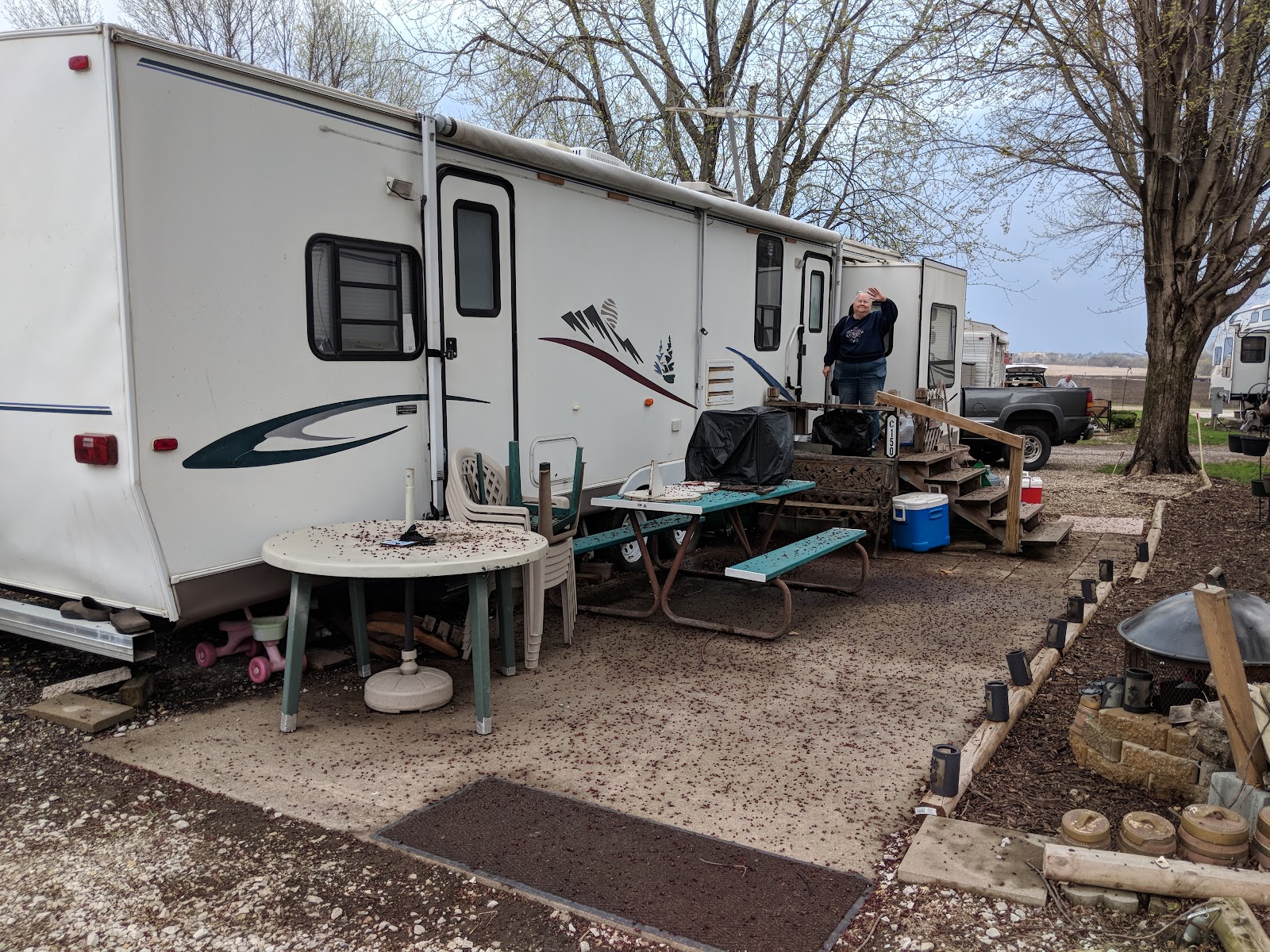 We unloaded the truck and went to Village Inn for breakfast or lunch or whatever you want to call it.

We then went to Strause Lock and had some keys made. (Again read yesterday’s post)

Then it was off to Walmart for basic perishable supplies. We came home, put the food stuffs away and went back to bed.

We had just awakened when son John called and invited us to meet at Bonanza for supper. (We’re back in the Midwest so I can stop referring to the evening meal as dinner.) We had a nice long visit with John and Dawn. It was nice to get “caught up”.

It started raining as we left the restaurant but had nearly stopped by the time we got home. After we were back in bed again another short lived but impressive storm passed through.

YOU ARE SO SLOW TO BELIEVE

Luke 24:13-18 and 25-27
“On the same day, two of Jesus’ disciples were going to a village called Emmaus. It was about seven miles from Jerusalem. They were talking to each other about everything that had happened. While they were talking, Jesus approached them and began walking with them. Although they saw him, they didn’t recognize him. He asked them, “What are you discussing?” They stopped and looked very sad. One of them, Cleopas, replied, “Are you the only one in Jerusalem who doesn’t know what has happened recently?”

Then Jesus said to them, “How foolish you are! You’re so slow to believe everything the prophets said! Didn’t the Messiah have to suffer these things and enter into his glory?” Then he began with Moses’ Teachings and the Prophets to explain to them what was said about him throughout the Scriptures.”

I have always wondered how these disciples could have walked with Jesus and not recognized him. I have heard preachers say that Jesus clouded their minds. But I see no proof of that.

I think that there are two real world things that could explain why they didn’t know him for who he was. One quite easy explanation is that his head covering (veil) was drawn across his mouth and nose to protect against the sun and road dust.* The other explanation is simply that they weren’t looking for him. They

The other explanation is simply that they weren’t looking for him. They knew that he was dead. Why would they look for him among the living?

One time I had done a kindness for a stranger. She thanked my saying, “Thank you for being Jesus for me.” To which I replied, “No, today you were Jesus for me.”**

*Head covering, a length of cloth around the shoulders, that could be pulled over the head and tied at the forehead. http://blog.adw.org/2017/03/sort-clothing-people-jesus-time-wear/