Brrr. 35° to start the morning. 54° inside. It was so warm at bedtime that I had opened the bedroom window. Sometime after midnight I woke and realized that it had cooled off … a lot. That’s when I closed the window. However, I didn’t think to turn on any heat. There are parts of the hill country that are predicted to have freezing rain today. Hmm hills, curves, and freezing rain … sounds interesting.

This is the day that Grandies was going to have their monthly dinner. However, due to the weather, the lunch was postponed because it was assumed that attendance would be lite.
And lite it was. Only eleven out of twenty one of us were there.

We started making plans on how we are going to participate in the various Easter Sunday ministries. One of the biggest projects that we have done in the past is filling several thousand (not an exaggeration) plastic eggs with candy. We will do this again this year. However the United Methodist Ladies (UML) will also be partiipating in this project. The Grandies will begin the job on a Wednesday. The UML will work on it on the following Monday and Grandies will finish it on the next Wednesday.

By the time we returned home it had dropped to 34° outside and still 54° inside because I still hadn’t turned on any heat. I quickly corrected that by turning on the electric fireplace and a space heater.

For lunch we had some left over pizza. Then we sat in our recliners, with blanket throws over us, for a nap.

We had plans to go to Dahlia’s for supper with some of the choir members before choir practice. However, when the time came, it was near freezing and raining hard. It was decided that we would do neither Dahlia’s not choir practice. Ella said, “Does this mean I’ve become a Texan? Because I don’t want to leave the house when it rains?” Now to explain that statement: one of the things we (2 people who lived through 65 years of Iowa winters) noticed when we first arrived in the Texas Hill country, was that our friends treated a rain shower like we were used to treating a blizzard*. 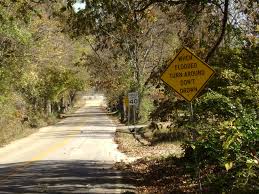 We laughed and thought (smuggle) how silly they were. That is until we were caught in a heavy rain and found our route to home was blocked because of water rushing over the road in a small valley. We came to a new understanding. The terrain is hills of mostly stone. With very little topsoil, the water doesn’t soak in but runs down hill. Most of the year the valleys are dry and therefore no bridge is built over the dry stream beds. Instead flood depth indicators are placed next to the road. And signs posted reading “WHEN FLOODED TURN AROUND DON’T DROWN”.

*A blizzard is a severe snowstorm characterized by strong sustained winds of at least 35 mph and lasting for a prolonged period of time—typically three hours or more.